Awarding of the predicate for gender equality and diversity in Erfurt 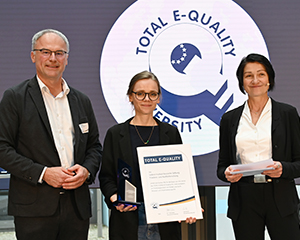 During cere­monies in Erfurt, PRIF received its certifi­cate along with 58 other organi­zations. PRIF was praised for placing a special focus on equal oppor­tunities in guide­lines and service agree­ments. The organi­zation of trainings and work­shops was also positively high­lighted. In addition, PRIF received one of sixteen sustaina­bility awards this year, as the institute received the dis­tinction for the fifth time in a row.

The award is presented every three years by the TOTAL E-QUALITY Deutsch­land e.V. initiative, which was founded in 1996. The jury includes members from com­panies, local autho­rities and scien­tific insti­tutions. Following a success­ful application, the award is presented for a period of three years by the TOTAL E-QUALITY e.V. asso­ciation to organi­zations that are parti­cularly committed to equal oppor­tunities and actively imple­ment them in practice. Institutions and organi­zations from science, business and adminis­tration as well as asso­ciations are eligible to apply.

Further information about the award and the other recipients can be found on the website of TOTAL E-QUALITY Deutschland e.V.