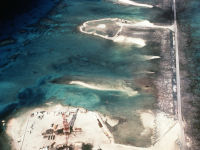 The new PRIF Report "Beyond the ban. A global agenda for nuclear justice" by Jana Baldus, Caroline Fehl and Sascha Hach provides a systematic review of global progress made towards achieving nuclear justice and of persisting shortcomings. To capture the multifaceted nature of nuclear justice, the authors propose an analytical framework distinguishing four different dimensions: (1) criminal liability (2) redress for victims (3) truth-telling and apologies and (4) legal reforms to ensure non-recurrence. The report applies the framework to analyze efforts to deal with the legacy of the 1945 Hiroshima and Nagasaki bombings, responses to the suffering caused by nuclear testing, as well as past and ongoing legal and political reforms that would influence assessments of the legality and legitimacy of future nuclear uses and tests and/or that have been put in place specifically to prevent the recurrence of nuclear uses and tests.

The report finds that some progress has been achieved in all dimensions of the nuclear justice agenda – albeit to varying degrees. For example, although some headway has been made with respect to redress, compensation programs are often underfunded, discriminate among different categories of victims and impose high standards of proof. The report concludes on a list of actions that non-governmental organizations as well as nuclear and non-nuclear states could take to advance nuclear justice.