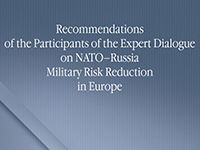 Photo: Cover of the offical statement

Relations between NATO and Russia have fallen to their lowest point since the end of the Cold War. From 2014 onwards, military activities of the two sides have multiplied. Today, their warships and aircraft encounter one another much more frequently.

In parallel, the architecture of arms control treaties and confidence-building agreements worked out at the end of the Cold War has eroded. Today, they cannot provide the degree of stability and predictability that they once did. Moreover, NATO and Russia are not communicating as they should.

These developments raise concern that an accident or miscalculation could lead to an inadvertent armed conflict, that is, a conflict that neither side desires. NATO and Russia should cooperate to lower the risk of such a military confrontation.

Since summer 2019, more than 40 security experts from European countries, Russia and the USA, organized by the European Leadership Network, have discussed the current security situation in Europe. While there was no consensus on the causes of the current situation, there was agreement that NATO and Russia must take concrete measures to reduce the growing military tensions and risks between them. They summarized their recommendations in the official statement "Recommendations of the Participants of the Expert Dialogue on NATO-Russia Military Risk Reduction in Europe", which was signed by 145 experts from politics, diplomacy, the military and academia - including Hans-Joachim Schmidt, our expert on arms control in Europe and Korea.