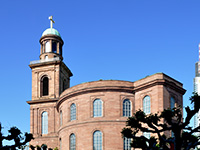 The year 2023 marks the 175th anniversary of the Frankfurt Parliament held in the Paulskirche in 1848. A coalition of various actors and institutions has founded the “Netzwerk Paulskirche – Demokratie im Kommen” to mark the occasion, with the aim of strengthening democracy as a concrete way of life and expanding it in view of the new global challenges. In addition to PRIF, the medico international Foundation, the association “mehr als wählen”, the Institute for Social Research, the Research Centre Normative Orders as well as the Research Unit Democratic Innovations and the “Forschungsinstitut Gesellschaftlicher Zusammenhalt” at the Goethe University Frankfurt are participating.

A broad program is planned. Among other things, projects are to be developed that enable direct participation, as well as spaces for thought and debate that span a broad spectrum of actors. Involved here are, for example, neighborhood forums, local citizen councils, scientific symposia and art events, but also global gatherings of civil society associations from all over the world. The goal is to involve as many people as possible in the project and to bring different perspectives into dialogue with each other: Democracy needs dispute and dissent and the constant questioning of the existing, says Nicole Deitelhoff, director of PRIF. “This is the only way to counteract today’s threats to democracy”.

To conclude the program, the results of the projects will be brought together at the “Frankfurt Days of Democracy” in April and May 2023. With a premiere in the Paulskirche, the network would like to make a Frankfurt-centric contribution to the national celebrations and, above all, focus on civil society engagement in Frankfurt.

The “Netzwerk Paulskirche” is open to further cooperation partners.

Further information in the press release (in German)