In an interview with Leibniz Magazine, Thilo Marauhn talks about the human right of access to clean water 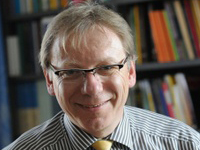 According to the UN, 2.2 billion people still lack access to clean drinking water today. The vital and at the same time limited resource is very unequally distributed globally, climate change and pollution further tighten the supply.

Thilo Marauhn, head of the PRIF research group on international law and professor for international law at the University of Giessen, explains necessary steps in international law to address the problem of water scarcity in an interview with the Leibniz Magazine: "It is both right and important that we formulate legal claims to fundamental goods such as water. Fundamental and human rights emancipate individuals vis-à-vis the state, to which such issues should not be left paternalistically."

Marauhn mentions, for example, the 2010 UN General Assembly decision to recognize the right to access clean water as a human right. Such resolutions are not legally binding for nation states, but they increase political pressure. In some countries, a fundamental right to water has already been incorporated into the constitution or national jurisdiction. Nevertheless, there is still an enormous need for action to implement the formally recognized human right to water locally and to alleviate the plight of the people affected around the world: "If we do not address the problem decisively together, the existing conflicts over the scarce resource of water threaten to escalate. This is a matter of pure survival. We then face the threat of wars over water."