Georg Nolte, former member of PRIF's Scientific Advisory Board, was appointed as a judge at the International Court of Justice. 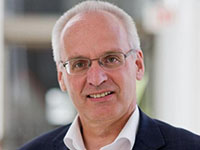 The Peace Research Institute Frankfurt (PRIF) congratulates Professor Dr. Georg Nolte (Chair for Public Law and International Law, Humboldt University Berlin) on his appointment as judge at the International Court of Justice in The Hague. He was elected to a nine-year term by the UN General Assembly on November 12, 2020.

Professor Nolte has been closely associated with PRIF for more than fifteen years: from 2006 to 2014, as a member of the Scientific Advisory Board, he was intensively involved in the development and implementation of PRIF’s research programs, particularly in research project II - "International Organizations, Democratic Peace and the Rule of Law" and subsequently “International Organizations and International Law” - and remained with the institute as a constructive interlocutor.

Professor Dr. Nicole Deitelhoff, executive director of PRIF, joined the congratulations from all over the world: ‘The appointment as judge at the International Court of Justice is a great personal honor for Professor Georg Nolte and a strong recognition of his many services to international law. We wish him every success in The Hague in his new office, especially in these challenging times for international law’.