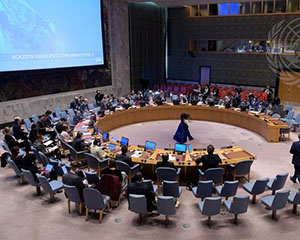 UN Security Council meeting on maintaining peace and security in Ukraine on April 11, 2022.

Russia’s attack on Ukraine represents a blatant breach of international law. The Advisory Council on Civilian Crisis Prevention and Peacebuilding (“Beirat Zivile Krisenprävention und Friedensförderung”) states in its statement of May 2022 that not to oppose it would corrode international law and prepare the ground for the “law of the strongest”. In it, it calls on the German government to provide even greater support for institutions that enforce international law and for proceedings based on international criminal law. “All possibilities should be exhausted to bring crimes against humanity and war crimes to trial in Germany,” the statement says.

In total, the Council formulates ten recommendations based on this foundation. These include strengthening historical-political education, further diplomatic efforts, anchoring a comprehensive concept of security in the National Security Strategy, and strengthening early crisis detection and strategic foresight. The entire statement with all recommendations is available for download here (pdf in German).

The German Advisory Council on Civilian Crisis Prevention and Peacebuilding (“Beirat der Bundesregierung Zivile Krisenprävention und Friedensförderung”) brings together civil society and academic expertise on crisis prevention and peacebuilding and advises the German government on the implementation of the guidelines “Preventing Crises, Managing Conflicts, Promoting Peace”. It is composed of 20 experts from academia and civil society. PRIF is represented on the advisory board by Dr. Melanie Coni-Zimmer.