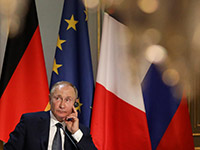 Russia's President Putin at a press conference after the meeting in Normandy format on Ukraine. Photo: picture alliance / abaca

While tensions between Russia and the West remain, there is a growing consensus in Western capitals that recent policy towards Russia has produced high costs, but offers no solutions. Among leaders in the West, French President Emmanuel Macron is the most vocal advocate of a reboot in the relations with Russia.

In the new PRIF Report Russia and the West. From confrontational dissociation to coexistence? (in German), Matthias Dembinski and Mikhail Polianskii develop a model of dissociation in order to reveal the dynamics of the conflict. In addition, the authors use their model to propose how the relations between Russia and the West could be rebooted. Thereby, they also refer to norms and institutions under which a new coexistance may be arranged.