The non-governmental organization Geneva Call is making history with its success. As a civil society initiative it has succeeded in becoming a norm setter and persuaded non-state armed groups to sign an agreement to eliminate and combat anti-personnel mines. What convinces non-state armed groups to bind themselves voluntarily to humanitarian norms? Using the example of one of the signatories from the Sudan, Stefanie Herr analyzes the factors which were decisive for the acceptance of the norm and thus works out suggestions for how the international community should deal with non-state armed groups. 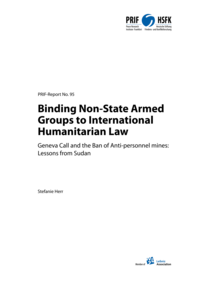