The nuclear age has been characterized by an emerging and now well-established norm of nuclear non-use, the ‘nuclear taboo’. In the realistic and naturalistic setting of the science-fiction TV series Battlestar Galactica, however, nuclear weapons are used frequently and at times massively. Claiming that science fiction can function as an illuminating ‘mirror’ for international relations scholarship and that we can learn something from ‘second-order’ (fictional) worlds, this article explores potential in-show reasons that render the absence of a nuclear taboo plausible within the universe of Battlestar Galactica. 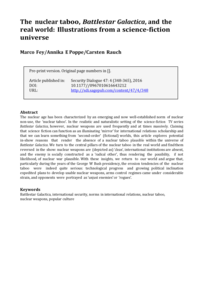